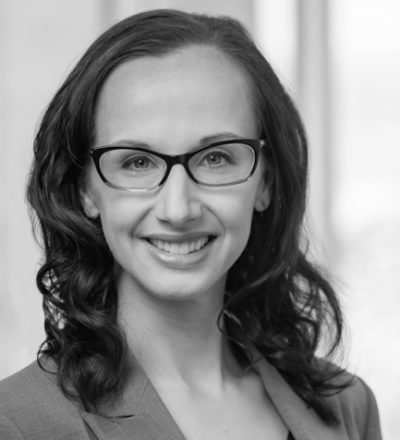 Elizabeth A. (Beth) Laughton represents clients in intellectual property matters.  She has represented major corporations in intellectual property and technology litigation, including patent disputes before the Patent Trial and Appeal Board, the district courts, and the United States Court of Appeals for the Federal Circuit.  She has also prosecuted patents before the United States Patent & Trademark Office. Ms. Laughton’s practice has spanned a wide range of technologies including pharmaceutical methods and products, diagnostic methods, steels, software applications, semiconductor fabrication, and business methods.

Ms. Laughton received her law degree from Duke University School of Law in 2009, where she was an editor on the Duke Law Journal and the Duke Law & Technology Review, and was elected to the Order of the Coif.  Prior to law school, Ms. Laughton worked on a drug development program for new tuberculosis drugs. She received her undergraduate degree in Biology with a minor in French Studies from Duke University.

Following law school, Ms. Laughton served as a law clerk to Judge Timothy B. Dyk of the U.S. Court of Appeals for the Federal Circuit.

Ms. Laughton is also an avid classical singer, with a particular focus on Renaissance and Baroque music, and performs regularly.